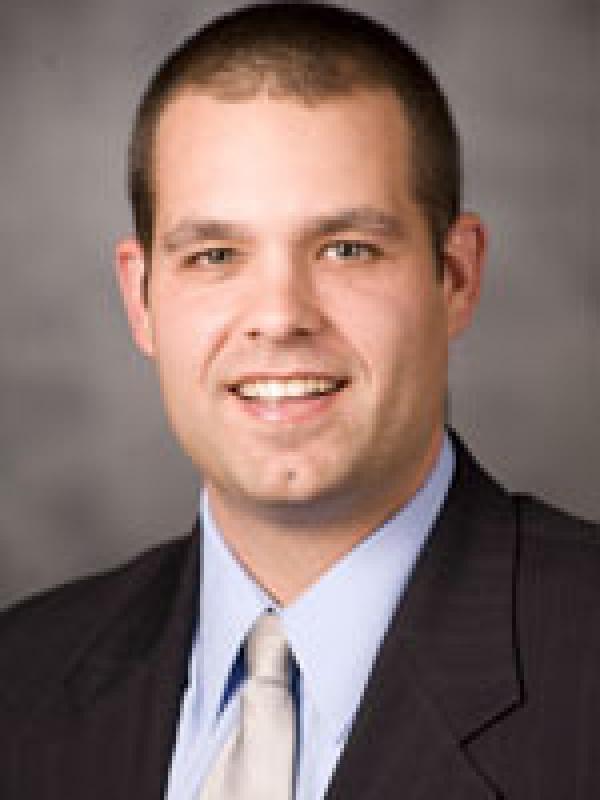 During the 2013-14 season, Richard’s teams qualified for NCAA Championships (women’s soccer, men’s gymnastics and fencing), won a conference championship (fencing) and made it to the Big Ten championship game (men’s ice hockey). In addition, five of the eight teams he oversees earned over a 3.0 team GPA for the academic year.

At Colgate, Richard oversaw the external operations of the department, including marketing and promotions, sponsorships, branding, game contracts and athletic facilities operations. He also oversaw the sports information department, ticket office and was the department liaison for fundraising and alumni affairs.

In addition to his external responsibilities, Richard supervised football, men’s and women’s ice hockey, men’s lacrosse, men’s soccer, men’s and women’s swimming & diving, men’s and women’s tennis and golf. He also served as on the Patriot League’s Sports Management Committee, Facility Managers Committee, Market and Promotions Committee and was the liaison to ECAC Hockey and Daktronics Sports Marketing. On campus, he was a member of the Campus Master Planning Committee, Campus Planning & Physical Resources Committee, Campus Identity Committee (University Branding), the Emergency Management Team and the Colgate Athletics Hall of Honor Committee. Prior to these committees, Richard served on the Faculty Affairs Committee, the Hamilton Pedestrian Safety Committee, Mentors in Violence Prevention (MVP), Men at Colgate Committee and was the athletic department liaison for the Student-Athlete Advisory Committee (SAAC).

Prior to his appointment to Associate Director of External Operations, he oversaw event management operations for all home Raider events. He served as the direct contact for visiting teams, officials and oversaw 100+ event staff employees. He was the tournament manager for various ECAC Hockey and Patriot League tournament games, including men’s and women’s soccer, men’s and women’s lacrosse, women’s tennis, golf and men’s ice hockey. In addition to home events, Richard was also the main contact for Cape Cod Classic hockey game in Hyannis, Mass.; the Colgate vs. Cornell men’s ice hockey game played at the Prudential Center, home of the New Jersey Devils, and the men’s lacrosse game vs. Michigan at Citi Field, home of the New York Mets.

During his time at Colgate, Richard raised sponsorship dollars by nearly 300% through both local and national partnerships, while creating a variety of new opportunities including a new Colgate Athletics ice cream flavor, Kids Zone ticket promotions and various new signage opportunities. In addition, Richard oversaw a rise in membership in both the Jr. Raiders program and the student Rowdy Raider program.

Outside of Colgate, Richard has been a panelist speaker at NACDA discussing external relationship topics, taught a high school winter session course on athletics administration and co-published (V. Chun) “Into the Hills” in Athletics Management on marketing in a rural area. Article

Richard joined the Raider athletic department after serving a 10-month stint as an Operations Manager for the Jason Taylor Foundation in Miami, Fla. During his time with the Foundation, he planned and organized fundraising events; coordinated appearances and business opportunities for the NFL standout; oversaw the website and organized a voting campaign for Taylor on ABC’s hit TV show, Dancing with the Stars. Prior to him moving to the Jason Taylor Foundation, he worked in the Operations Department for the Miami Dolphins for three years. During his time in the NFL, Richard oversaw the Dolphins Training Camp operations, coordinated sponsor-related events and held various game-day responsibilities. Richard was also part of the Dolphins advance team for away games, including the first regular-season game played in London during the 2007 season at Wembley Stadium. He also coordinated game day credentials for Super Bowl XLI and oversaw the pregame tunnel and halftime set-up for the 2006 & 2007 Orange Bowl games.

The North Adams, Mass., native graduated from the Massachusetts College of Liberal Arts in 2003 with a degree in Business Administration, where he was also a two-time all-conference performer on the Trailblazer baseball team. The two-time captain was also a member of the North Adams Steeplecats of the New England Collegiate Baseball League (NECBL) during his junior season and won the gold medal in Apledoorn, Holland as part of the American International Sports Tour baseball team after his senior year. Richard then moved onto Springfield College, where he earned his master’s degree in education with a concentration in Athletic Administration in 2005. While working towards his degree, he served a dual role as a graduate associate for the Springfield Athletic Department and an assistant coach for the Pride baseball team.

Richard currently resides in Worthington, Ohio, with his wife Molly.