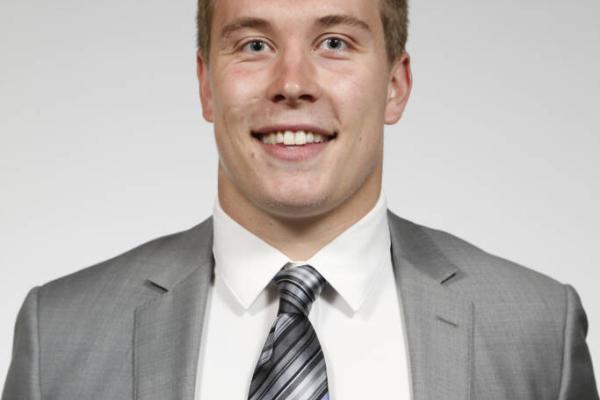 He started as a janitor in the Woody Hayes Athletic Center and parlayed that into a spot as a walk-on to the football team.

After graduation, he is now back in the athletic department as the Buckeye’s first director of name, image and likeness.

Hittle will join Monday with Anomaly Sports Group’s Luke Fedlam, Assistant Athletic Director of Compliance Paia LaPalombara and three members of the Ohio State women’s volleyball team to discuss NIL and the ways it has and will shape collegiate athletics in "The Offense and Defense of NIL: Exploring the evolution of name, image and likeness and its impact on collegiate sports."

Hittle, an alum of Ohio State’s sports industry program, returned to the university’s athletic department in 2021 to help guide student-athletes through the NIL process.

“I realized that there were a lot of student-athletes that didn’t know the direction of their life outside of sport and I wanted to help them figure that out,” Hittle said. “I’ve been fortunate enough that that’s what I get to do day to day now.”

Hittle took the less-traditional path of getting involved in the athletic department. He noticed a student-worker job posted on the Handshake app that led to him being a janitor within the Woody Hayes Athletic Center.

The janitor role got Hittle’s foot in the door at the WHAC and in the winter of 2018 he was invited to walk onto the football team as a linebacker for two seasons.

Niko Palazeti, assistant director of strength and conditioning, said Hittle rarely missed a chance to make note of his dream to play for the Buckeyes.

“I remember him telling me that he’d worked at a facility job and hoped of joining the football team,” Palazeti said. “I thought that was a noble aspiration.”

Hittle left his work sweeping, mopping and sanitizing one day, tried out, went back to work and was soon after offered a position on the team.

Palazeti recognized the effort Hittle put in each day leading him to outlast other aspiring players.

“There are so many people that want to be a part of it [the Ohio State football team],” Palazeti said. “You just want to see how deep that commitment is, so you make training pretty difficult and he [Hittle] did good. He definitely lasted.”

While an undergrad and student-athlete at Ohio State, Hittle was involved in Bucks Go Pro 1.0, which provides internships and real-world experience for student-athletes through The Eugene D. Smith Leadership Institute.

The Bucks Go Pro 1.0 program offered Hittle an internship in sports operations where he said he worked with women’s soccer, women’s basketball, men’s lacrosse and others.

“I was able to see behind the scenes,” Hittle said. “That was a cool experience as a current student-athlete, while I was doing that, to learn what actually goes on… what makes everything happen.”

When he graduated in the winter of 2020, Hittle took a job at the University of Tennessee as a graduate assistant working in academic counseling for the football team.

His time at Tennessee contributed to his development of being a source that student-athletes could turn when needing guidance with NIL.

Hittle built strong relationships in Ohio State’s athletic department, so he was the first in line for associate director of student-athlete development of The Eugene D. Smith Leadership Institute when the position became available in July of 2021.

“Keeping in contact and making sure people know what you want to do so that when those things open up, you’re first on their mind,” Hittle said.

Hittle took the opportunity and never looked back, which recently led him to the position of Ohio State’s first NIL director.

While in the associate director role that brought Hittle back to Ohio State, NIL had just been announced, so that area needed someone to take the lead.

“It was a space that needed all hands-on deck because it was going to be a heavy lift,” Hittle said. “When this role opened up it was just an easy transition; it just made sense.”

Palazeti said Hittle has many qualities that are required to excel in this position, including focus, drive, and the ability to support and form relationships with everyone around him.

“I think he was really, really good at connecting with all different types of athletes,” Palazeti said.

Mitchell Pehlke, a fourth-year sports industry major and member of Ohio State’s men’s lacrosse team, became part of NIL on the first day possible with a deal through Degree Deodorant.

When navigating through NIL, Pehlke said Hittle has been a great resource for him and is easy to connect with.

“He reaches out to me if he has any questions, or vice versa, and I think he’s such a young guy that’s so hip,” Pehlke said. “I hate saying that word, but with the young guys it makes it so easy to connect with them.”

On its second year, NIL is becoming much more prominent in college athletics. Hittle deals with athletes across all 36 sports at Ohio State.

Companies typically come to Hittle looking to make deals with athletes. Hittle will then reach out to that athlete to lay out the important terms and educate them on what to look out for in a contract, however, some athletes have agents who manage their NIL deals.

Hittle’s biggest advice to student-athletes that are offered NIL agreements is to always be comfortable with what they’re representing because from this point on they are associated with one another.

“I always tell student-athletes to make sure they understand their own personal brands, like what do they stand for,” Hittle said. “What are their values? Does the brand asking to partner with them make sense?”

Hittle is not permitted to steer athletes towards or away from agreements, but he is to offer the best guidance for the athlete to make their own educated decision.

“I am trying to make sure the student-athletes understand that maybe not all the time opportunities are going to come to you but in this space its more about creating opportunities for yourself,” Hittle said.

Right now, Hittle’s goal is to add value wherever he can and help Ohio State set a standard for what NIL should look like across the country.

“[Currently] trying to figure out how I can be the best I can be in this role and make sure I’m servicing all of our athletes to make sure they have the best resources and opportunities as possible,” Hittle said.