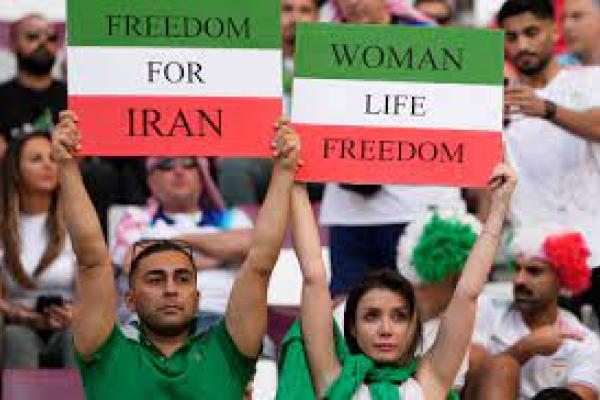 After the death of Mahsa Amini, killed in police custody after her arrest for improperly wearing her hijab, protests erupted throughout Iran and were even prevalent in sports.

On Oct. 16, Elnaz Rekabi, an Iranian rock climber, climbed in a competition in Seoul without her hijab, as a way of protest.

Iranian native and doctoral student at Ohio State, Zahra Abedinezhad, said Rekabi was brave for her actions because she is an athlete, rather than an ordinary person.

“We do not cover ourselves [when we are abroad] and it’s okay to them because we are not that representative,” Abedinezhad said. “But when you are on a show; if cameras are on you, you have to cover your hair.”

Because of her actions, Rekabi was seized by the Iranian morality police and shunned inside her home and away from society.

Parvaneh Hosseini, a campaigner of gender equality in Iranian sports, said government officials told Rekabi to make a video saying that her actions were accidental.

According to Hosseini, if Rekabi did not iterate to the public that her failure to wear a hijab was a mistake, her family would pay the consequences.

Rekabi was not well-known for pre-protesting, which showed that any stage in sports might be big enough to bring awareness. This was inspiring to those advocating for the cause— “Woman, life, freedom!”

Many other unfamiliar teams and athletes protested in November, such as those in water polo and beach soccer, the women’s basketball team called Canco, a female archer, and on a worldwide scale, the Iranian soccer team.

Abedinezhad said soccer is a top-three sport in terms of importance to the people of Iran, followed by wrestling and volleyball.

Iran played England in their first match of the FIFA World Cup on Nov. 21 and refrained from singing their national anthem.

“People ask them [Iran’s soccer team] to be the voice of them,” Abedinezhad said.

For doing this, the government criticized the team and sang the anthem, albeit unenthusiastically, at their next match against Wales.

Hosseini, who was born and raised in Iran, said the people were disappointed that the soccer team’s “protest” gained less attention than those who have a much smaller following.

Though soccer is a beloved sport in Iran, many people were rooting against the team in this World Cup, according to Abedinezhad.

In the previous World Cup, Iranian citizens wanted nothing more than to see the soccer team win, but this year things changed.

Winning brings a sense of pride, nationalism and satisfaction to the government, Abedinezhad said, which is the opposite of what people want to see in this time of protest.

Hosseini said Iranian athletes are being repressed, as many are currently imprisoned for participating in protests within their sports.

“Right now, many sport men and women are in danger of getting very, very long, or even death sentences. Right now,” Hosseini said. “We are trying to raise awareness about this.”